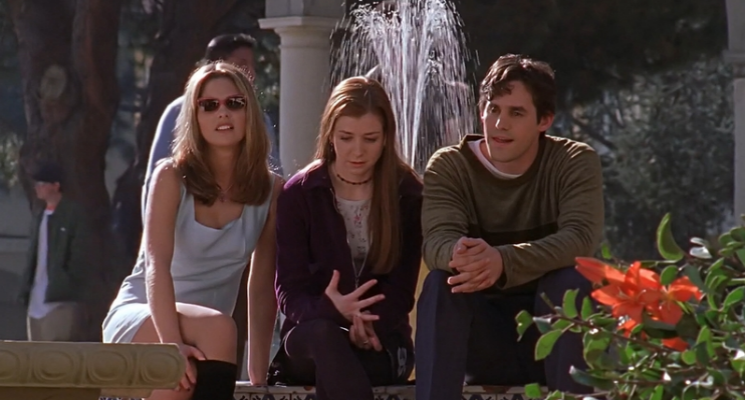 Even I have to admit that it’s pretty funny that when I sat down to write about Buffy’s famously terribly internet episode… I got distracted by the fact that my website is apparently full of hacker garbage. Where is Willow when I need her?

(I’ll figure it out. By which I mean, I have smart friends. But I think one of the lessons here is Don’t Leave Your Domain Ignored and Sad for More Than Four Years OK.)

“I, Robot… You, Jane”—which I am going to call “IRYJ” from here on our, because it’s easier and it looks like a new Meyers-Briggs type—was never a good episode. Not ever. It was dated from the moment it was written, and on top of that, it contains some of the clunkiest you-don’t-support-my-relationship dialogue ever written.

But I kind of love it. By the time this episode aired, I had already met my first terrifying, possibly murdery Internet People. It’s been more than 20 years since I first got in my dad’s car and went to a cybercafe (they were a thing, I swear) in Portland to meet up with a handful of people I’d been talking to via IRC. I even kissed one of them. (He looked a bit like Riley from later Buffy, were Riley actually attractive to me, and he played XTC in his car and wanted to kiss me because it’d just been a really long time since he kissed anybody. I was very young, ok?)

The internet has brought me a lot of people. From IRC to Diaryland to LiveJournal to oh-hey-now-everyone’s-talking-about-their-lives-on-social-media, and back to tiny, secret pockets again, I’ve found my people. I was finding them even before that when, as a young teen, I submitted my name to the pen pal section of Metal Edge magazine, a thing I can only barely grasp was both ok with my parents and not viewed as totally dangerous. But I lived in rural Oregon, and half the people I wound up spending years writing letters to didn’t even know where my state was.

But in 1995, meeting people from the internet was definitely kinda weird, so I can forgive Buffy her reaction when, two years later, Willow got an internet boyfriend.

“I know our ways are strange to you, but soon you’ll join us in the 20th century—with three whole years to spare!”

What happens: Some monks in ye olden days trap a demon in a book, and he stays there, until the advent of modern technology means that Willow scans him into the internet! Wacky dated hijinks—and some surprisingly thoughtful moments—occur. Probably no one will ever want to date again, at least until next week.

As silly as this episode is, from its monks-in-Italy intro to Moloch’s stupid body at the end, it does one important thing in Buffy’s narrative, and it introduces Jenny Calendar.

I’ll since Jenny’s praises in a minute, but first: the narrative thing. It’s huge: “IRYJ” lets the entire show off the hook for the internet. Imagine if Buffy debuted on TV this year. Jonathan would be posting Buffy videos to Instagram Live. There’d be Twitter feeds dedicated to Slayer Spottings. (This is a thing very few superhero shows ever address, but I digress.) Within the show, there’d be a huge contingency of technopagans, a secret dark internet full of spells and magic; everything would be researched online, with so few of those thick, dusty tomes Giles likes. Willow’s hacker setup would look like Felicity Smoak’s.

But with this one episode, Buffy got the internet mostly off its back. It’s there, Jenny and Willow will talk about it, Willow will hack things—but it’s not a player. It’s established as something that doesn’t play well with the slayer universe.

And, in a gesture so subtle it’s lost under Fritz’s frowning brow and Moloch’s inexplicable chat screens, this is tied to how the internet needs everything. It’s actually weirdly prescient, a thing that foreshadows how much of our lives now go into staring into screens, seeing what everyone else is up to, FOMO, amirite? Moloch, the internet boyfriend demon, just wants his followers’ love. All of it. He’ll give them everything! They just need to love him.

Look, I love the internet, but sometimes I feel like it feels about me like Moloch felt about his followers. Like Jareth felt about Sarah: “Just fear me, love me, do as I say, and I will be your slave.” In a very loose, very 1997 way, this episode knows how much power is in the internet. It just doesn’t totally understand how it works yet.

The absurd boys who appear only in this episode do not exactly support the notion of the internet being a healthy place. They also exist to help the internet demon in the physical realm, and to help Willow with the difficult task of depicting a version of “Internet Use” that still makes me almost cry with laughter. The scene when Willow chats with Moloch, I mean “Malcolm,” and says all her replies while sort of typing them! “E-letter!” Jenny “puts out a flash.” OK. Dave’s explanation about pulling someone’s profile up based on their username, but, um, in what service, Dave? Dave also gets to yell at a computer, which listens to him and replies in white text on a black screen. Internet demons are very advanced.

But internet demons underestimate friendship, which is the other excellent part of “IRYJ.” Buffy starts out deeply, deeply skeptical of Willow’s as-yet-unseen paramour, as if she’s really got a leg to stand on when she asks if Willow’s rushing into it. Buffy, you love a vampire, please have a slightly more open mind. Their fear of this kind of new thing is somewhat understandable, though, given what they’ve experienced, especially where Xander and romantic pairings are involved. What, really, were the odds of Willow’s love interest NOT being evil?

That said, Willow’s defensiveness is so believable, and she’s so lonely, she can’t even see how creepy and controlling Malcolm’s behavior is, which is another tick on the side of “this episode is crap … but I guess it has some points about human behavior.”

Moloch, though, only understands things in binary, good/evil, nice/not nice. He tries to manipulate Willow with Buffy’s history, but Willow’s more subtle than that: She notices not what Moloch is trying to tell her about Buffy, but that he knows things he shouldn’t know. Stalkery things. In an awkward, par-for-the-episode’s-course way, this exchange is about how knowledge isn’t inherently good or bad, but something you obtain and make use of in different ways.

I’m almost arguing myself into thinking this episode is smarter than I think it is.

And then there’s Jenny Calendar, arguably the only good adult woman to ever exist in—and understand—the magical world of the slayer. Joyce comes around, eventually, but does Buffy ever meet another functioning, non-evil adult woman? (If I’m forgetting someone, please let me know. I can only think of Glory and Dru and Maggie Walsh and that short-lived evil watcher and the preying mantis lady and…)

Jenny is the un-Giles, modern, playful (“That’s not where I dangle it.”), connected. Giles is alone in his library; Jenny has a coven online. She is the balance to the things Giles is missing about the modern world, but she’s not fully central to the story. She’s just outside it. A little bit of modern connectivity, but not too much. Mostly, they need Giles. But sometimes they need Jenny, too.

“It’s been so nice talking to you.”
“We were fighting.”
“Let’s do it again sometime.”

Despite disliking computers Giles is the one who figures out which demon they’re dealing with. Gilesposition! (And a reminder that books are full of useful knowledge.) He doesn’t know how to deal with an internet demon, not with an old ritual, and when Buffy says they should get Ms. Calendar, he wonders how they will convince her there is a demon in the internet. It’s pretty simple:

Jenny Calendar is many things, and a reminder that not all power lies in the establishment is one of them.

The climactic scenes of “IRYJ” are such a muddle, a mess of the contrast between Willow’s justifiable heartbreak and that amazing clunking sound that happens when Buffy kicks Moloch’s new body. On the one hand, the computer lab has inexplicable weird gas; on the other, Willow has finally met a dude, and the dude is literally a demon.

But despite Dave (RIP, Dave) and Fritz (RIP, frowning Fritz), Jenny is here to remind us that not all Internet People are bad. Some of them are very smart. Some of them will help you save the world, or at the very least the people you care about. For all its dire warnings, “IRYJ” allows for a certain amount of cooperation between the old dusty books and the shiny new internet: Jenny typing the binding spell while Giles reads it aloud. Modern life: not entirely rubbish after all.

Of course the gang still has to defeat the body Moloch gets bound into, which involves Buffy fighting a predator made of styrofoam pads and Willow hitting it with a fire extinguisher and eventually the robot body’s head getting shocked off when it punches an electrical panel, and even I cannot argue this scene into being anything but cheery ridiculousness.

Back at school, Jenny is wearing a halter top to work, as one does. Giles already has a crush; you can tell because he goes on and on about how computers don’t smell and books do, and smell is the most powerful trigger to the memory. Which is about as close as Giles has come to talking about feelings, is it not?

But feelings end so poorly, so often. Demon robot, praying mantis, stupid vampire—why should Giles get off that hook?

“None of us are ever going to have a happy normal relationship.”
“We’re doomed.”
[awkward laughter]

This might be true. But it’s not the internet’s fault.

IMPORTANT THING THAT NEVER COMES UP AGAIN The internet, basically. (OK, yes, I exaggerate. I know.)
HEY, THAT GUY! FACTOR HOLY SHIT DAVE IS JESSE FROM THE FAST AND THE FURIOUS

Previously: “Angel” | Next: “The Puppet Show“