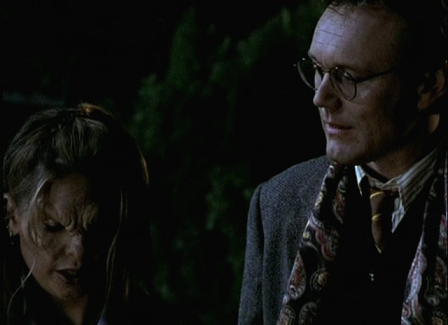 Of course the episode with the traumatized kid has a story by Joss Whedon. “Nightmares” is one of season one’s stronger entries, though it doesn’t hang together perfectly. It feels a bit like two halves of different sandwiches; they line up, but they still don’t match. (One of those halves is the Master, and the other half is the nightmare plot, in which the Master essentially has a meaningful cameo.) But what matters is the affecting character work “Nightmares” does in between the scenes featuring the eerie child who looks like but definitely is not a young Joseph Gordon-Levitt.

In hindsight, it’s kind of funny how little the Master has to do with this season. He’s as close as it gets to a Big Bad, but he has none of the presence of later Big Bads; he’s more of a lurking shadow than a constant threat. The boogieman is out there! He just can’t get you yet. For an establishing season, this makes a lot of sense. You don’t want to tear out of the gate with super-charismatic villains, and there needs to be room for the ensemble to blend, and for the central characters to establish themselves outside of the primary conflict.

This season’s primary conflict isn’t the Master, anyway. It’s life versus work, fun versus responsibility, doing what you have to versus doing what everyone thinks you’re supposed to. It’s figuring out what your life means for you, even if you have a destiny. The Master’s just a big symbol of all the darkness that destiny can hold.

But that doesn’t mean he’s not scary. “Nightmares” starts with Buffy dreaming that she’s in the sewers, in an outfit that’s a nifty reversal of what she wears when she really goes down to face him: black leather and braids. So practical, yet so not iconic. The hand on her shoulder isn’t the Master, but just Joyce, waking Buffy up for school. Which has its own horrors. So much of this episode is about the power of a child’s fear—which is why the first nightmare, the actual nightmare, is Buffy’s. Her fear is powerful too.

“If there’s something bad out there, we’ll find, you’ll slay, we’ll party.”

What happens: Weird shit! Weird shit happens, and then Willow figures out that people’s nightmares are happening in real life. Buffy takes a while to see the weird kid who keeps appearing, but that’s understandable, because one of her nightmares is about her shitty dad telling her that his divorce from Joyce was Buffy’s fault. But everything is actually the fault of a terrible abusive baseball coach, because adults can be horrors, too.

Nightmares and worst fears kind of smash themselves up here, which is fine, and makes me grateful that I don’t generally dream about my worst fears. (My nightmarish dreams are so much more random than that.) The Master is very into all this fear, and gives the Annoying One a speech about fear being a mind-killer, because apparently he’s an Atreides.

“Fear is in the mind. Like pain, it can be controlled. If I can face my fear, it cannot master me. Something is happening above. Something new, a powerful psychic force. Can you feel it?”

The Master is not all that smart, because the powerful psychic force is fear, or at the very least is born of fear. And it brings out everyone’s deepest fears in ways that are very telling. Poor Wendell, this episode’s Jesse (though he survives), dreaming about the spiders he feels so guilty about. Giles’s nightmares take awhile to become clear, but ultimately, they’re about failing Buffy: he gets lost in the stacks, and then he can’t read—both things that would render him unhelpful to his slayer. Cordelia’s fears are about vanity, but they’re also about loss of status; that scene where she’s being dragged to chess club is much less about disdaining nerds than it is about losing all her power, and being involved in something no one—or no one she approves of—cares about.

Xander’s nightmares go hand in hand: one is about being exposed, and the other is a wacky twisted thing that boils down to covering up his insecurities. He starts to laugh about the clown from his childhood birthday party, but then it tears through the sheet plastic (presumably from someone else’s nightmare, like the swastika on the wall) with a knife and an evil chuckle and Xander has no choice but to take it seriously. Which I think is part of his nightmare: Facing himself, and having to take what he sees there seriously. It’s not all fun and candy bars when the killer clown shows up. Sometimes a joke isn’t going to hide whatever else is really going on.

Willow’s nightmare seems like a continuation of her talent show freakout: onstage, forced to perform! The bigger part of it is the fear of being discovered as a fraud. She’s famous, the best soprano, etc etc, and then she’s not; she’s just a girl, squeaking. Her nightmare is imposter syndrome, which feels so accurate as to be a little heartbreaking. Willow doesn’t entirely know who she is yet; she doesn’t know how to own what she’s good at, except with Xander, who doesn’t see her how she wants to be seen. If you watch all of Buffy and then you look back at this, at the Willow and Buffy we meet in the first season, you could make a pretty stellar argument for Buffy and Willow as one of the great female friendships in pop culture. That’s what makes me cry, when it all comes to an end: it’s these two who change everything about slayers. Together.

But that’s years away, so let’s talk about Buffy’s nightmares, which are also crushing. She dreams about failing—failing school, failing her family, failing herself. Her fears are about not being enough. (I still kind of want to know what happens to your actual history grade if you fail a history test in Nightmare Timeline.) I want to grab her and drag her away when she believes her dad, not because it’s obviously a nightmare, but because no one should have listen to that. No one should have that kind of hurtful blame in their minds, but people do, and Buffy fears it, fears being a problem that can’t be solved.

Hank Summers is so cruel that even though I know this is just Nightmare Hank, I remain skeptical of him, all these years later.

Excuse me. When did they put a cemetery in across the street?
And when did they make it night over there?

Giles claims the last nightmare for himself, but it could’ve been any of theirs: Buffy, dead. Buffy, turned into a vampire. It’s Buffy’s, too, because the Master is there, gloating, pushing her into a grave—the buried alive nightmare is one she’ll live through, later, and it’s so awful to rediscover how much Buffy feared that very thing. It’s probably also Willow and Xander’s, because their friend would be something they can’t stop alone.

There is no better illustration of the power these nightmares have than the things Giles says when he believes Buffy is dead—even though he knows about the nightmare situation; he’s the one who sorted out that eerie child Billy crossed over from the nightmare world he’s trapped in and brought the nightmares with him, because of course he did. This IS the Hellmouth. But fear is fear, and Giles dreads losing Buffy. “You were so gifted,” he says. “I’m sorry,” he says.

But Giles is still the reason Buffy is going to get through this. Xander is the first one who figures it out: Sometimes, you just need to punch your fears in the face. “You were a lousy clown! Your balloon animals were pathetic!” And Buffy’s job is to punch other people’s fears in the face too, which is exactly what she does, with Giles’s encouragement: She and little Billy’s astral projection find the “ugly man” with the club arm and she tells it the truth:

“There are a lot scarier things than you. And I’m one of them.”

Billy has to face his own fear and pull the mask off the ugly man, who was his nightmare made flesh. The biggest lesson of Buffy might be that you can have—and you can take—more power than the world allots to you, and this is one of the moments where the story demonstrates exactly that. Buffy listens to Billy, and believes him, and tells him he was right—all of which gives him the power to stand up to someone with far more power than he has. This baseball coach is the human monster the gang considered in “The Puppet Show,” but it’s not like they expected. He’s just this guy, you know? This awful guy.

The nightmares, like so much else in Sunnydale, dissipate when everything is put to rights—when Billy wakes up and quotes The Wizard of Oz at the gang. It feels like they should linger, and they do, even if they don’t directly come up again. These nightmares get everyone’s worst fears out of the way; they’ve lived through them now. They know just how bad they can be. But they also know that some nightmares can be punched.