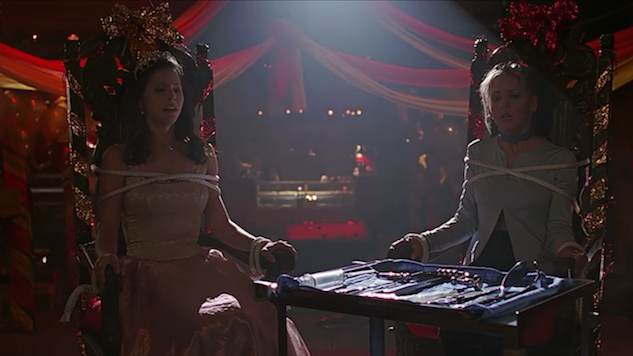 As previously mentioned, there was a long period of time where it seemed like this episode was always on. Always. Any time I turned on the WB, there was Clea DuVall, awkwardly trying to make conversation with Cordelia and her gang of mild teenage harpies. There was Buffy, going full Jedi on her invisible enemy. There was Cordelia, showing an unexpected soft side before pivoting on a goddamn dime and turning into her old self again.

“Out of Mind, Out of Sight” is a very Cordelia episode for season one—in fact, it opens on Cordy, who loves spring, primarily because it gives her the chance to campaign to be the May Queen. She’s a peculiar genius at making things about herself, from the very turning of the seasons to The Merchant of Venice. “Shylock should get over himself,” she opines, in a glorious moment of obliviousness.

The Shylock moment—brought to us by yet another teacher who will never be seen again—illustrates, on the surface, Cordelia’s apparent lack of sympathy. It introduces the episode’s theme a little more overtly than later Buffy tends to do; the teacher wants to talk about Shylock’s anger at being an outcast from society, and lo! Here is a student with a great deal of anger at being an outcast.

But to bring Shakespeare into it from another angle, the lady doth protest too much. Cordelia works very hard at being the center of society, and what she doesn’t understand is that not everyone is good at it. To her mind, anger is just whining; she probably thinks those who feel outcast aren’t trying hard enough. Not everyone can do what she does, what the end of the episode makes so clear: She can turn her queen bee attitude on and off like a switch. She’s not an airheaded twit; she’s calculated her position and how to maintain it. (She can still be a bitch.) Of course she wind up going to L.A. to be an actress. She’s acting all the time. She cares so much about being the queen that she’ll put on whatever face it calls for—including showing Buffy her gratitude, when it comes right down to it.

Marcie Cross gets a pretty good end in this episode, because she’s not a villain. But neither is Cordelia.

“I think I speak for all of us when I say HUH?”

What happens: Weird shit! Cordelia’s date is attacked by a baseball bat in the locker room. Another mysterious attack happens to a teacher, then Harmony, then Cordy herself—and Buffy gets caught up in it all since she’s trying to figure it out. Marcie Cross, seen only in flashbacks, has turned invisible from lack of attention, and she’s got a point to make. She’s kind of a dick about it, but then, what teenager hasn’t been a dick about wanting attention, at some point?

“Out of Sight” is one of season one’s stronger episodes, but it’s not without its weak spots—like the scene when Willow and Xander go into fits of extremely forced giggles while reminiscing about a Cordelia moment of the past. The point isn’t about Cordelia; it’s to show how Buffy can still feel lonely, even with her new friends. They have a history she wasn’t there for. But they also have a lot more Cordelia baggage, and a lot stronger defensive mechanisms as a result. “What kind of moron would want to be May Queen, anyway?” Xander scoffs.

“I was,” says Buffy, quietly. It’s not that often, after this, that we get reminded that Buffy was once “normal,” the kind of perky popular girl who had time to care about dances and coronations and other normal teen stuff. The way she says those two words is infused with grief, but a quiet, interior sort of grief, the kind her life doesn’t have room for anymore. She has her own rage about being an outcast, but slaying doesn’t allow a lot of time for reflecting on that.

Especially not when there are dead students. Or not dead, this time. “There are no dead students here … this week,” says Snyder, drily, because everything he says is dry. And there aren’t—no ghosts, no asteroid body children, no vampires, no monsters. Just a girl, lonely, invisible.

Every time Buffy finds a way to make some teen cliché literal, I love it a little more. Marcie feels invisible; Marcie turns invisible; what would that do to a person? Would you think it was your feelings that made it happen, or the world’s perception of you? When the gang figures it out, Buffy reads it as something that was done to Marcie. That they, the other students, did to her. The collective power of dozens of “Have a nice summer!” yearbook signatures.

(There’s one other strand of plot this episode and it’s about Angel sneaking up on Giles, revealing that he can’t be seen in mirrors, and then conveniently telling Giles that he can get the one excellent super-powered book of prophecy that Giles needs. And then he opts to peace out, as invisible girls aren’t his specialty. What is your specialty, Angel? Other than lurking, and obtaining precious Codexes? Ok, also he saves Giles and Willow and Xander from a basement full of gas, because the show would also like us to know he doesn’t breathe. A lot of vampire explanation going on there in the background)

Even as the centerpiece of this episode, Marcie Cross is still kind of invisible. When Cordelia comes to the library, claiming someone is after her, she says, “This is all about me! Me me me!” For once she’s right: it is, at least on some level, because this episode is about perception, and about there being no good and bad guys, no people who never feel lonely. Even Cordelia feels alone, sometimes, and Marcie’s as unable to imagine that as Cordelia is unable to imagine Marcie’s point of view. To Marcie, Cordelia is the bad guy, the May Queen, the girl it’s always about. To Cordelia, Marcie is a weirdo throwing her friends down stairs and trying to choke a teacher. Does one follow the other? Does it have to? Marcie is the victim until she becomes the aggressor—and that’s where the line is.

I almost wish “Out of Mind” was a little more sympathetic to Marcie, though I find her frustrating: You have this cool power! Use it for something other than the thing you resent everyone for—paying attention to Cordelia! In the end, even Buffy runs out of sympathy: “I really felt for sorry for you … but you’re a thundering loony!” Which, to be fair, is not an unreasonable thing to think about someone who’s drugged you, tied you up, and threatened to perform some nasty amateur surgery on your classmate.

But Marcie’s not a villain, and doesn’t get a villain’s end: she gets a future, albeit a dark one. And Cordelia, ever resilient, gets to go back to being Cordelia, but with that other side. She’s no longer just the bitchy popular girl; she’s even capable of listening, as in my favorite exchange:

She even says thank you—and then she calls them losers when stupid boyfriend Mitch shows up. But the performance is now visible. The Scooby gang have seen the script, and understand the role in which Cordelia has cast herself. It doesn’t mean they have to like her. It just means that, in her own way, the real Cordelia is invisible too.

(And not trying to murder anyone.)

HEY, THAT GUY! FACTOR Clea DuVall, obviously
DOES BUFFY GET INJURED? Drugged, which seems like a thing slayers should get over faster?
WORST FASHION CRIME AGAINST HUMANITY Direct from my notes: Willow’s pants are bad.
IMPORTANT THING THAT NEVER COMES UP AGAIN Marcie Cross, assassination student
IN HOW MANY WAYS DOES XANDER NOT DESERVE WILLOW’S AFFECTION He does ok? Apart from being smug about the one time he knows a thing?