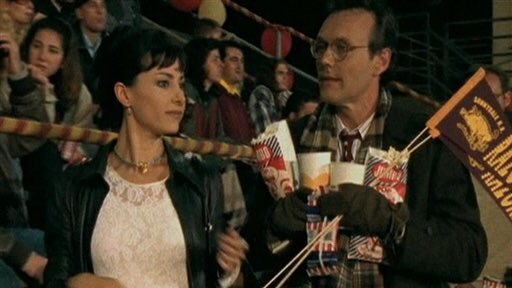 “Why did someone drag a girl’s body from a grave?” is only one of the episode’s important questions; the other is “Can Giles muster up the courage to ask Jenny Calendar on a date?” His blustering, vocabulary-heavy attempts to practice on a chair are, naturally, interrupted by Buffy and Xander in one of my favorite kinds of Buffy scene: our heroine demonstrating that she’s actually pretty good at normal life, when slayer life lets her have a peek at it. She’s perceptive, she’s practical, and she understands what people want. And she wants to help, even when the person in question—in this case, an increasingly frustrated Giles—would really prefer that she stop talking.

In the middle of all of this, Xander somehow winds up saying that being called an idiot kind of turns him on, and there is rarely a more perfect line delivery in the Buffyverse than Sarah Michelle Gellar turning to Nicholas Brendon and saying, intensely, “I fear you.” The banter this episode is incredibly on point—so much so that I want to just quote all the good parts and call it a day.

Giles: Grave robbing. Well, that’s new. Interesting.
Buffy: I know that you meant to say “gross and disturbing”.
Giles: Yes, of course. Terrible thing. Must put a stop to it. … Dammit.

By now it is more than obvious that whenever students we’ve never seen before appear, complete with names and friendly with Willow, they’re involved in this week’s plot (and will probably never be seen again). This week’s Ominous Students are Chris and Eric—the former a soft-spoken science nerd, the latter a kid with an unfortunate facial hair thing who shall henceforth be referred to only as the little creeper.

Little creeper: Come on. The camera loves you.
Cordelia: I thought yearbook nerds didn’t come out of hibernation till the spring.
Little creeper: It’s for my private collection.

See? Creeper. The little creeper and seemingly harmless Chris mutter some things about how Cordelia—currently protesting the science fair to an indifferent Principal Snyder—would be perfect for them … BUT SHE’S ALIIIIIIIVE.

(I am bored with this plot, ok? I have to amuse myself somehow.)

“Some Assembly Required” is very clearly a show nearly—but not quite—finding its feet. The whodunnit part goes on too long and is not all that interesting. The biggest misstep is needing there to be a bad guy (the little creeper), and to make it another Cordelia-gets-kidnapped episode (at this point she already has some right to make things about her pain). It tips the balance of humor/drama into cheesy drama, and doesn’t allow space for the more thoughtful motivation that keeps trying to sneak in in the form of Chris’s character.

But it does have a lot of snappy dialogue, and does a lot of work on the Buffy/Angel relationship. “Love makes you do the wacky,” Willow says—a line we all remember, but I’d forgotten she was saying it about Angel, of all people. That’s the theme for the week, and it repeats, neatly, in the Buffy/Angel drama, in Giles and Jenny’s flirtation, and, horribly, in Chris’s plan to build his dead brother a girlfriend. He loves his brother, and he needs his mother back (she just smokes and watches video of her dead son’s football games). Sciencing big brother Daryl the partner he wants probably seemed reasonable, under those conditions.

It’s not, obviously, and for so many reasons. “What would she be thinking?” Buffy wonders about the dead girls waking up, if Chris and little creeper have indeed reanimated them. Oh, Buffy. Her sympathy is always with the girls, but this is still an eerie bit of surely accidental foreshadowing.

Still, she tries to be sympathetic to Chris, and that changes the game. No one’s been on his side for who knows how long—mom checked out, bully big brother still making demands, little creeper encouraging in the worst possible ways. As Chris comes to his senses, little creeper just dives deeper into the dark side, re-kidnapping the already-saved-once Cordy in order to set up a Final Boss Fight with Buffy and Daryl.

It’s a decent fight, though a little absurd: why is zombie jock extra strong? Just because he can’t feel pain? Why does the episode take a moment to try to make Daryl sympathetic (his horrible fake lip tremble!) when he’s obviously an asshat of the first order? Between his shitty jock bullying, his entitlement problems, and his attempt to manipulate Cordelia into fond reminisces of their vague relationship, there is nothing sympathetic about him except that he’s dead (ish), which is hardly a standout factor on this show.

Really, the problem is that there’s too much Daryl, and that I’d rather be watching Giles and Jenny, their football-game banter cut somewhat short by the arrival of Willow and Xander, who mindlessly sit down just in front of the would-be couple. It’s not just that I’m now an Old and therefore enjoy the antics of Fellow Olds; it’s that Giles and Jenny make a sweet yet practical counterpart to Buffy and Angel: they’re both human, they go on normal dates, they have similar interests, they can go sit in the park and drink coffee together, should they so desire.

They’re a reminder that Buffy and Angel’s relationship, whatever it is, is even more complicated than a “regular” teen romance. Angel knows this better than Buffy does: he acknowledges his stupid jealousy, and that it’s not necessarily about what Buffy thinks it’s about. “He gets to see you in the sunlight,” Angel says, and it seems like a little thing, but it defines how different they are.

It’s a pretty good little speech, for Angel, even if he’s wearing a brown jacket. (Come on. Brown doesn’t go with his brooding aesthetic, however bad that aesthetic might be.) Their relationship is too fresh to address this stuff head-on for long, as illustrated by Angel trailing off rather than saying outright that he has to get home before the sun comes up. That makes it too concrete. For now, Buffy will just walk him home.

HEY, THAT GUY! FACTOR Not a big one this week, but I’m amused that Ingo Neuhaus, who played Daryl, not only had a small part on True Blood, but was cast as “Beefy Deputy” in the Veronica Mars movie.
WORST FASHION CRIME AGAINST HUMANITY There are so many terrible patterns (from my notes: “What are Buffy’s pants. Willow is wearing a shirt made of a quilt”). So many. But those ribbed cheerleader-uniform shirts cause me emotional pain with every appearance.
IMPORTANT THING THAT NEVER COMES UP AGAIN How are more Sunnydale residents not trying to figure out the science of resurrecting their loved ones? There are a lot of dead loved ones in this town.
IN HOW MANY WAYS DOES XANDER NOT DESERVE WILLOW’S AFFECTION In so many ways I cannot count them, but dickwaving with Angel is definitely among those ways.

Previously: “When She Was Bad” | Next: “School Hard”