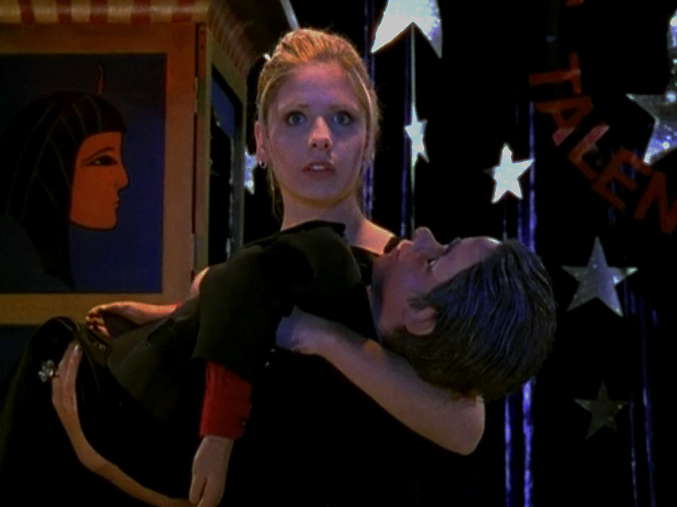 “So, we think school events are stupid, and we think authority figures are to be made fun of.” Why, hello, Principal Snyder, clearly no one saw you there. “The Puppet Show” is not one of Buffy’s high points—though it does contain a Buffy high point at the very end—but it does feature the hideously, deliciously authoritarian debut of Armin Shimerman as Sunnydale’s new principal, who has almost as little patience for smug librarians as he does for rebellious students.

Snyder is one of Buffy‘s great unsung villains, simply because he’s the most common kind: a rigid, small-minded man with limited power and delusions of grandeur. His villainy is inescapable for teens and for adults: the malicious control of reverence, rules, schedules, consequences, participation. He’s the steely-eyed team leader who believes in meetings and knows your weak spots. He will have order in the halls, even when order in the halls is the least of anybody’s worries.

The fact that the entire scene is set to the playing of a very sad tuba is just the icing on the schadenfreude cake.

“That’s the kind of woolly-headed liberal thinking that leads to being eaten.”

What happens: Giles has to run the talent show! And then Buffy and Willow and Xander have to participate. Except that then people start getting murdered and also there’s a kid with a really weird talking dummy that turns out to be a cursed demon hunter with a dirty mind and I genuinely am unclear about how this part ever seemed like a good idea.

“The Puppet Show” works really, really hard to sell the idea that random brilliant Morgan, who totes around a dummy that is clearly speaking on its creepy own, is the murderer killing talent show participants for select body parts. So hard. So very hard. The misdirect is jumping up and down waving MURDER! flags. It’s not a demon, because it used a knife! It will be harder to hunt a person, because demons are pure evil!

That’s a good reminder, but not one that’s really relevant this week. In fact, the plot this week is pretty much irrelevant; it’s built to create a few good character moments and to play with the idea that Buffy may have to face a human someday, but it is not this day, for lo, the killer is actually a demon that needs a heart and a brain, and the revealed-to-be-a-demon-hunter dummy thinks it’s Buffy.

Who, exactly, thought a lascivious dummy-embodied demon hunter was a good idea? The dummy’s name is Sid and he makes dirty jokes and to Sarah Michelle Gellar’s incredible, enduring credit, she nevertheless sells her every single scene with him. She sells the pretend horror-movie scene with the dummy in her bedroom at night. (I remain obsessed with those uncomfortable-looking pillows of hers.) (A lot of camera angles and musical cues are used to try to make this episode like a horror movie, to varying degrees of effectiveness.) She sells a fight with a dummy. And she sells the hell out of an almost touching moment when it becomes clear that breaking his curse means Sid dies. His body is long gone.

Then Sid ruins the moment by trying to put his hand on Buffy’s thigh, and I question the adult male writers who thought this was a funny gag.

Amid all of this nonsense you get a somehow-not-cruel-or-petty running gag about Cordelia’s impenetrable vanity; Xander making incessant jokes about the dummy to cover up how freaked out it makes him (“RED RUM! RED RUM!”); a tiny glimpse of Willow’s potential dark side (“It could be me! It’s not, though.”); and another slight misdirect with the skulking, omnipresent Snyder. Maybe he’s a demon?

The talent show itself seems to involve all the participants being on stage at once, and often, and more students than are usually seen in Sunnydale High’s halls. It bears no resemblance to any talent show I’ve ever seen or participated in (let’s not talk about those), but the absurdity is a good note for a weirdly goofy/maudlin episode that, despite the whole dummy thing, is better than it should be. And that’s allowing for the fact that Giles—who the demon goes after in the end, after Morgan’s brain is too damaged for him (poor Morgan!)—is supposed to be the smartest person around, yet willingly puts his head in the stage magician’s “fake” guillotine.

Though I would rather not, I have to give Xander credit for a moment: when Buffy and Sid battle Mark the Demon Magician, Xander has to grab the guillotine rope to keep Giles from having his head sliced open—and he does. Those are some serious reflexes. Giles lives, the demon magician dies, and Sid, with a very fake looking knife, gets his wish: a stab to the demon’s heart, and he’s not trapped in a dummy body anymore.

Despite its few good moments, and SMG’s totally game performance with a frickin’ dummy, “The Puppet Show” is the very best at the very end, after the curtains have been pulled and Snyder reveals his denseness, his willingness to only see what suits his own narrative. (“I don’t get it. What is it? Avant garde?”) The very best part is Buffy, Willow, and Xander delivering the absolute worst performance of Oedipus the King, which might be the worst thing they could possibly have chosen to perform. Good actors acting like bad actors is such a weird trick, but when it’s done right it hits a sweet spot of embarrassment and glee—which it does, here, in that little moment when Willow absolutely panics and runs away, and Buffy and Xander close ranks without even looking at each other. 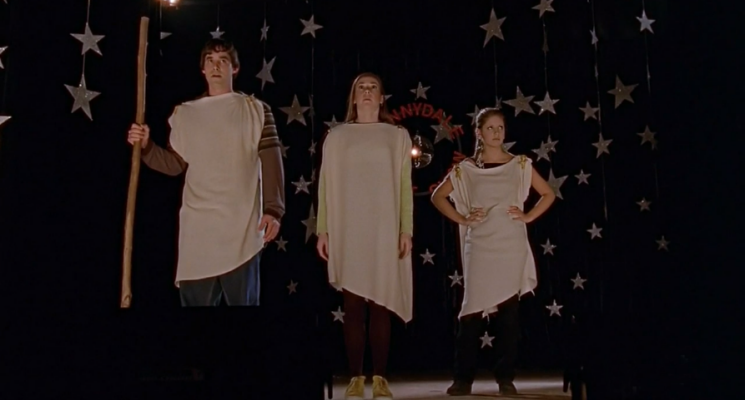 You might save the day, but you still have to participate. You’re still at the mercy of a little shit like Snyder. Demonic metaphors and prophesied destinies are one thing, but the normal parts of high school suck a lot too.

WORST FASHION CRIME AGAINST HUMANITY Cordelia’s short-sleeved turtleneck sweater, good lord.
IMPORTANT THING THAT NEVER COMES UP AGAIN Do they just cancel the talent show after this? Who wins all the little trophies and scolls Giles so carefully carried? (This is not really important. I know.)
HEY, THAT GUY! FACTOR Sadly if there is a That Guy among the many talent show participants, IMDb is unaware of it.