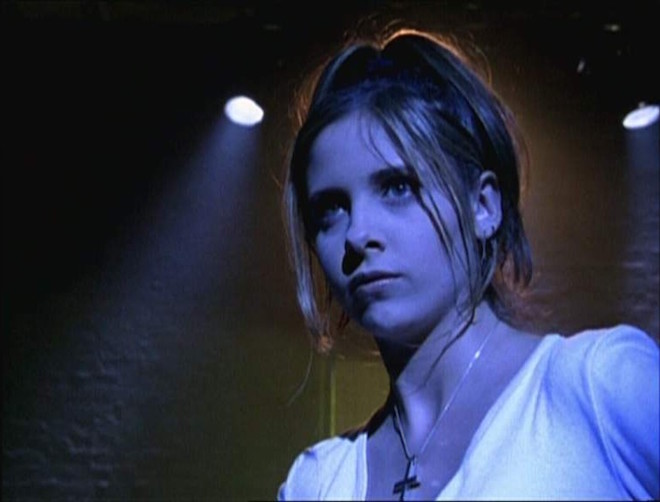 What happens: Buffy Summers moves to Sunnydale with her mom. It’s supposed to be a fresh start, a break from her past in LA, where she got expelled for burning down the gym (she can’t exactly explain that it was full of vampires). But she can’t escape being the chosen one, especially considering Sunnydale is on the Hellmouth and there’s a very old, very cranky vampire who wants to escape a magical prison and wreak some havoc.

What’s astonishing, in hindsight, is just how good this two-part premiere is. It doesn’t start with Buffy, but with another petite blonde who also isn’t what she appears to be. Like Buffy, she’s not the girl in trouble. She is the trouble. But she’ll be the last one standing … because she ate everybody else.

Buffy’s introduction, in contrast, is totally mundane, other than the fact that her nightmares are bananas. Wake up, time for school! In quick succession, we meet Xander (being a doofus), Willow (the way she brightens when Xander says she’s just the person he wanted to see), and Cordelia (the least convincing high school student ever). And, before long, Giles.

But there’s one important introduction before Giles: the library. We see the library before the librarian. It’s not just a classroom; it’s a character, and the way Buffy sees it for the first time implies that Joss Whedon knew that from the get-go. It looks so safe! All those books! But it’s also full of demonic texts. And Giles’ enthusiasm when he slaps a big leather-bound tome in front of Buffy is just off enough that it’s really unclear whether he’s enthusiastically helpful or a total creeper.

To Buffy, he’s basically both. But she can’t blame him for being the thing that drags her back into slayage, because it’s not his fault there are vampires and dead guys in lockers and weird baby-faced David Boreanaz in what I’m pretty sure is a horrible satin blazer lurking in an alley. But Giles is the face of the patriarchy, I mean, the Watchers Council; he’s the one telling Buffy she HAS to and it’s her job.

Buffy’s response to him—”Go ahead. Prepare me.”—is the bookend speech to her stunner in “Prophecy Girl.” This speech, and the whole premiere, sets up not just the way Buffy’s conflict with the status quo of slayerhood, but the conflict within herself: She’s so angry about what she’s already lost, and what’s expected of her, that Giles trying to encourage and prepare here, and tell her that she’s not there by accident—none of that matters. That’s just more people telling her what to do.

But when someone needs her, when Jesse gets taken and she knows no one else can get him back, she acts. She acts regardless of the consequences, be they social or parental. Cordelia, telling a story that gets more and more grandiose. Buffy’s mom, in “The Harvest,” with the show’s thesis statement in one classic line: “I know. If you don’t go out, it’ll be the end of the world. Everything is life or death when you’re a 16-year-old girl.”

Buffy’s resistance to having to be the savior is so perfectly threaded through her introduction—that moment when Giles says everyone else is oblivious to the danger, and only we see the sadness on Buffy’s face when she says, “Lucky them.” This isn’t a woe-is-me-I-never-asked-for-superpowers story, where the audience is left wondering what’s so bad about being a superhero. It’s the loneliness of adolescence, crystallized into resenting a responsibility that she cannot share. There really is no one else that feels like Buffy does. There’s no one else who can do what she does.

And the thing about Buffy is that she doesn’t do it like she’s supposed to. This one girl will not stand alone. Xander’s the one who figures out the Harvest will go down at the Bronze. Willow’s computer skills are entirely relevant to Buffy finding her way. She’s already a baby Watcher—and it’s giving her confidence, as we see when she stands up to Cordelia in a small and wonderful way. (“Deliver.”) And Xander is already a baby annoyance, insisting that he should go with Buffy because … he’s not a man if he doesn’t? Shut up, Xander.

The premiere isn’t perfect. There are inexplicably lights in the under-graveyard tunnels. The score sometimes borders on sounding like something that got cut from Labyrinth. At moments, when Buffy’s hunting vampires, we’re treated to an agonizing camera angle straight out of a dated first-person shooter. And every bit player overacts like their lives depend on it. But on so many fronts, Whedon knew exactly what he was doing. The cruelty of having Jesse not just dead, but turned, so one of his friends will have to kill him. The sheer amount of surprisingly effective infodumping Giles pulls off. The little things that signal the way the whole show will go: Buffy’s inevitable quipping-while-fighting. Her trust in the Scooby gang. Her improvised weapons (this time, it’s a cymbal and a pool cue) and convincing fights. And the way she runs off the remaining vampires, at the end of the failed Harvest, with just that look. That look that closes the opening credits. The one that says she knows exactly what she’s capable of, even if she doesn’t always want to do it.

And, last but not least, the way life just goes on. School’s just school. Cordelia’s still awful. “People have a tendency to rationalize what they can, and forget what they can’t,” as Giles says while quirky ‘90s music plays. He’s so happy, even when he says the line he’ll say again when it all comes to an end:

“The earth is doomed.”

HEY, THAT GUY! FACTOR
If you’re only watching this now, it might be weird to see Dexter’s girlfriend/the mayor of Defiance as a little baby vampire.
APPEARING BAND
Sprung Monkey. This is actually a band name. There are many ways in which the ‘90s were terrible and don’t let anyone tell you otherwise.
DOES BUFFY GET INJURED?
She ices her elbow! Does that ever happen again.?

One thought on “Welcome Back to the Hellmouth: Rewatching Buffy the Vampire Slayer, 20 Years Later”