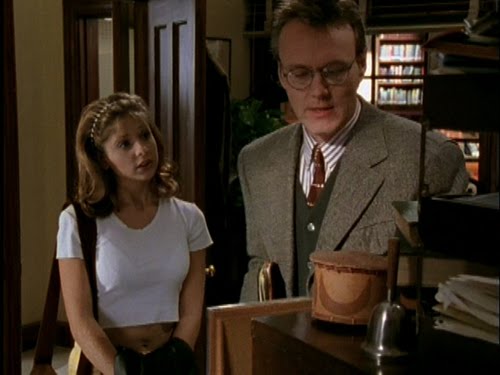 I didn’t realize what a tool Xander Harris was until my third time through Buffy.

It’s weird, now, to look back and try to remember what I thought when Buffy was first on. I probably didn’t think much about Xander at all. I thought about Willow, and those inevitable, torturous one-way crush lines, where you like somebody who likes somebody else, and never any two shall so much as kiss under the bleachers. It’s all safe and it’s all terrible.

I’m paying attention now, Harris. Let’s see how you fare once you’re out of the clutches of the hot praying mantis teacher.

“Right. Wasn’t here, didn’t see it, couldn’t have stopped you.”

What happens: Buffy’s cool science teacher is replaced by a giant praying mantis with a thing for virgin boys.

There have been a lot of arguments that Xander is Buffy‘s Joss Whedon insert character, but that’s too simplistic: Xander is part of Whedon, but so is Willow, so is Buffy, so—even—is Cordelia, and on down the line. But Xander is the lone teenage boy (at least until Oz appears on the scene), and is presented as his own kind of cliche. Dreaming of saving the girl who doesn’t need saving. Dreaming of playing a terrible guitar solo. Drooling on himself in the library.

I hope he has an embarrassing dream boner.

For all that Xander is the focus for a large part of “Teacher’s Pet,” the episode does have one good part—one overlooked part. Dr. Gregory, who sees right through Buffy’s … everything. “You have a first rate mind and you can think on your feet,” he tells her. He knows she can excel, and he expects her to do so. In a world full of skeptical principals and judgmental adults and distracted moms, here’s a virtual stranger who knows that there is more than one way to be smart. Has anyone ever told Buffy she’s smart? How much does that mean to her?

Poor guy. And poor Buffy. This could just be a setup for her dislike of Mrs. French, the hot sub, but it’s more than that: it’s the rare moment someone gives Buffy approval for something other than slaying.

(There’s a whole subplot with Angel and a vampire with a fork for a hand and it’s really only relevant for 1. Xander sulking that Buffy didn’t mention Angel being attractive and 2. Angel giving Buffy his giant coat, because ‘90s fashion allowed for that sort of thing.)

But this thoughtful section only lasts so long before Xander’s incoherent at the sight of Mrs. French, who has a wildly inconsistent accent and a smirk that basically defines “semi evil to fully evil female characters of the ‘90s.” There is nothing more beautiful in this episode than Buffy and Willow smiling innocently and refusing to help out a babbling Xander when he cannot remember where class is because Mrs. French is smiling at him.

Are we supposed to feel sympathetic toward him? This is the incomprehensible thing: Buffy gets so many things right for its female audience and then… there’s Xander, and his behavior in episodes like this one. It’s almost sweet, how naively unexamined his character is. All that attention paid to undoing the tropes about tiny blonde girls fighting monsters, but a teenage dude is just a teenage dude, rendered idiotic at the sight of a pretty face.

It’s kind of insulting to teenage dudes, isn’t it? “Teacher’s Pet” isn’t a highlight by any stretch of the imagination, but it does use its high school setting well. It’s a monster-of-the-week episode where the terrible sub is really, truly terrible—and not just that, but she ate the one understanding teacher. She’d probably need to die even if she didn’t try to eat the two most neurotic virgin males in the entire school.

But I will give it credit for not just having Dr. Gregory tell Buffy that she’s smart—but showing us a Buffy that uses her science learning to figure out what’s what. No human can turn its head all the way around. Buffy knows, ok? She learned it. In science! The one time class is actually useful!

She even gets why Xander’s into Mrs. French: pheromones. But science is irrelevant in the face of teen boy ego. Is there a way to watch this where you think Xander is just lonely and single? Hard to imagine when he’s saying things like “What kind of girly name is Angel, anyway?” He doesn’t deserve poor Willow, and Willow’s concern, and I fully admit that there was a point in this episode where I rather wanted Mrs. French to eat Xander.

Pause for a moment and imagine that show.

……and now we’re back in the basement, which is the basement in all Sunnydale houses. There’s another ugly unexamined thing going on here, and that’s the fact that Blaine saw someone get murder-raped by a praying mantis the size of a basketball player. This is the person who needs counseling. Mrs. French, as is usually the case with monsters of the week, is a pretty straightforward villain, but there just aren’t that many lady monsters and I kind of wish she’d had a little more going on than just, you know, murder-raping virgin boys, which is really extra gross and horrible if you pause to think about it for more than 10 seconds.

But mostly, we don’t, because everything rushes along (with an assist from Fork Guy) to the end of the hour, when science class (bat sonar!), bug spray, and machetes defeat the monster. It’s such a gory concept—Buffy has to cut off all her limbs—that we get the final fight, such as it is, in silhouette. On a show where vamps go poof, there’s not a lot of call for truly bloody stuff. There are, though, a lot of opportunities for Buffy to save Xander, no matter how dorky his dreams of it being the other way around.

There’s one real moment of heart as the bug show comes to an end, and it’s the look on Buffy’s face when the new crappy science teacher shows up. That surly disappointment. School sucks, but a good teacher can make all the difference: it’s a common enough lesson, but it usually doesn’t help you with oversized bugs.

DOES BUFFY GET INJURED? Nope!
APPEARING BAND Superfine. I don’t know how long I can keep tabs on the bands when they are this bad.
IMPORTANT THING THAT NEVER COMES UP AGAIN Hey remember how the eggs in the science closet were hatching?
IN HOW MANY WAYS DOES XANDER NOT DESERVE WILLOW’S AFFECTION Uncountable.

Previously: “Witch” | Next: “Never Kill a Boy on the First Date“

One thought on “Welcome Back to the Hellmouth: “Teacher’s Pet””