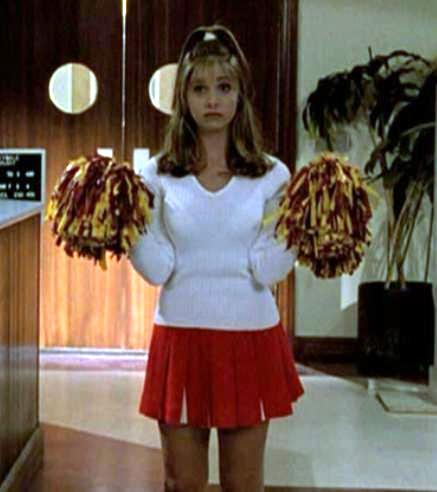 “This is madness. What can you have been thinking? You are the slayer! Lives depend on you!”

Cheerleading is the perfect stage for an episode that, in broad strokes, is about the harm parental pressure can do—not just to one kid, but to those around her. It’s a sport that’s widely disdained as superficial and dumb (a perception that’s changing, sure, but this was the ’90s), and one done mostly by women. “Cheerleader” is common teen movie shorthand for “popular, perfect, unattainable, probably mean unless she’s the really sweet one.” You put cheerleaders in your vampire show, you’re doing it for a reason. Or several.

“Witch” is much better than I remembered. And much lonelier, too.

“I will still have time to fight the forces of evil, ok? I just wanna have a life. I want to do something normal. Something safe.”

What happens: Buffy tries out for the cheerleading squad, but at tryouts, another contender catches on fire. Wacky supernatural hijinks are certainly afoot—ones that involve fellow student Amy’s youth-craving mom, magical tests performed in the science lab, and Buffy’s first near-death moment. Also, Joyce struggles with being a good mom, and Xander is such a dude.

Cheerleading is basically the opposite of slaying: a team sport that’s about being peppy and bright and loud and visible. Whether Buffy really wants to spell letters with her arms or just wants something that’s her own, un-prophesied and demanded of her, is totally debatable. But she can’t stop helping people. She gives nervous Amy a pep talk for no reason; she barely knows her, if at all. She puts out the girl on fire. She even helps Cordelia, who at this point is nothing but a bundle of unfunny quips and self-importance. There are no vampires, but there’s still something bad to fight. Something targeting young women.

And that something runs in direct opposite to her own life. Amy’s mom is so controlling, so infuriated by how her daughter chooses to live, that she takes that life over. Evil mom is laser focused, cruel, and, well, murderous. Joyce, on the other hand, is distracted, well-intentioned, and prone to putting her foot in her mouth. She’s no ideal parent either—but she knows it. The moment when Buffy, hurt, walks out of the kitchen and Joyce is left there, alone and fully aware that she blew it—that’s the truly Buffy moment. It’s about something else, but here, in the lonely recognition that even good parents can’t always understand or talk to their kids, it’s more than just clever or pointed. It’s generous, and honest.

“Witch” isn’t just about parents. That early scene, when Giles rails against the very notion of Buffy trying out for cheerleading, gets straight at the conflict between what a person wants and what’s expected of her. How can Buffy think about cheerleading when the world is at stake? Well, Giles, because people are complex creatures who can care about more than one thing at a time, but also because the world tries to put constraints on what young women can do and believe, what’s appropriate or ridiculous for them to care about, and Buffy’s not buying it.

Giles’ imperfections are on excellent display, from his snottiness toward cheerleading to his admission that the spell at the end is his first casting. Buffy’s not the only one with a lot to learn. But you can see Giles trying. He’s got a slayer who’s nothing like he expected, and she found herself a team—already!—who are ridiculous and helpful in equal measure. But he listens to Buffy, and you can see them start to truly trust each other—Buffy to trust his knowledge, and Giles to trust this surprising girl who is just so utterly determined to make the world a little safer on her own terms.

(That scene when Buffy realizes Amy’s trapped in her mom’s body, and Giles sits quietly, letting them talk it through. He does know when to shut up.)

Buffy’s only been slaying vampires for a year and change at this point. How much worse was it in LA, alone, without the instantly forming Scooby gang? They’re in on it now; they sort of have to help, or they’d go bananas trying to keep the secret of Sunnydale. Knowing all those things that no one else knows, that it’s never gangs on PCP or wild animals—it would be so lonely. So disconnected. That’s what the slayers are supposed to be, and Buffy, to some degree, knows that. She tells Xander and Willow they don’t have to get involved, but they’re a team.

But this episode is still so lonely. “I’d say he should get a girlfriend if he wasn’t so old,” Buffy says about Giles—a crack that is, if you think about it, a really sad suggestion that he has no peers he can talk to about any of this—just these students. There’s a strong theme throughout Buffy of adults not being able to accept the weird shit that goes down. They rationalize it, they brush it off, they pretend it didn’t happen. But it’s Giles’s job to tend to all those things. It’s a job as lonely as Buffy’s.

Joyce, like Buffy, is new in town, and too overworked to make new friends. Amy is enough of a loner that no one noticed when her mother took over her body. Amy’s mom, evil as she may be, was so unsatisfied with her adult life that she became a teen again—a thing Joyce says she wouldn’t do even if it would help her understand Buffy. Xander’s pining awkwardly over Buffy, hurting Willow’s feelings obliviously; Willow, for her part, pines back after this manchild who doesn’t deserve her. The conclusion that Buffy comes to at the end of season five, the thing she says to Dawn—that theme is already present. The spellwork, the fighting, that can—sometimes—get done as a team. But the rest of life? You’re on your own.

DOES BUFFY GET INJURED? Sick unto near death, so yes.
IMPORTANT FIRST APPEARANCE: Amy, yes, but also GILES’S AWESOME CAR.
WORST FASHION CRIME AGAINST HUMANITY: It’s truly a tough call but the winner is Amy’s tie-dyed peace sign shirt, several decades out of its prime.

Previously: “Welcome to the Hellmouth”/”The Harvest” | Next: “Teacher’s Pet“