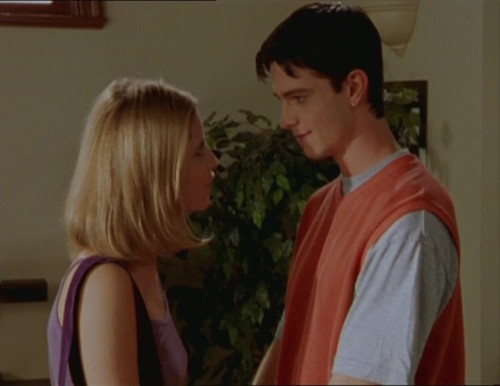 At some point in the last 20 years, I forgot that “Lie to Me” was written and directed by Joss Whedon—just the third such episode, and the last one before “Innocence.”

Back in the Day (by which I mean the ‘90s), we didn’t have 10,472 media outlets telling us, each week, who’d directed an episode, what to expect, how many heart-punches we’d have to endure. We just had previews (“Scenes!” someone would yell, and everyone would rush back to their spot on the futon or the floor, wine glass refilled) and then, at the episode’s start, credits. “Oh god, it’s a Joss episode,” was heard more than once. You roll up your emotional sleeves and you get your tissues.

“Lie to Me” is an odd one. Is Ford’s story sad, or is he a creep? Does Buffy essentially murder him when she leaves him in the club, or does she give him what she wants? Is that the same thing? And, on the nitpicky level, did Spike turn Ford on purpose, to torture Buffy? Or did that little bit of vampire mythology—the whole big sucking thing—get a little handwaved, this time around?

Season 2, Episode 7, “Lie to Me”
Written and directed by: Joss Whedon
Original airdate: November 3, 1997
Rewatch date: November 9, 2017
Reason for late rewatch: 11/3 is my wedding anniversary and Thor: Ragnarok came out. I was busy.

“Go. Experience fun. I’ll try not to have a crisis.”

END_OF_DOCUMENT_TOKEN_TO_BE_REPLACED

Welcome Back to the Hellmouth: “Lie to Me”