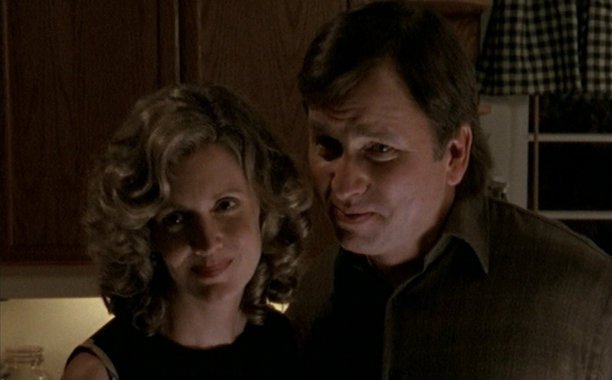 Long TV seasons — those 22-episode runs I used to take for granted, and now occasionally long for — make for some very weird timing. There isn’t a Buffy for me to talk about between the beginning of March and the end of April, which is one thing—but the episode before that long break is “Killed By Death” What were they thinking?

And what were they thinking when this season went into winter break with “Ted,” only to come back with “Bad Eggs” — followed immediately by “Surprise”?

Not that “Ted” is top-ten-worst-episodes levels of terrible, exactly, but this kind of tv timing — placing a middling monster-of-the-week episode after a heavy two-parter that does a lot to shift this season’s overarching plot — feels so of an era. There weren’t midseason finales, back in the day, but there was also just more room to play. Shrinking seasons have done away with some of the filler — a word that sounds like a pejorative, but I don’t mean it that way. Let’s call it narrative filler: episodes that didn’t move a story arc forward (at least not much), but allowed for character work to thrive. I can think of a lot of shows that could benefit from more of that that, and only one that’s really good at it: Legends of Tomorrow, which flips the standalone/arc ratio (of what I watch, at least), transforming it into “episodic funtimes with the looming threat of a Big Bad.”

“Ted” is a character episode, and another moment for Buffy to be right (eventually). To get a win — if one that comes after a lot of struggle. This is either the show building her up before it tears her down so cruelly, or giving her a cushion of confidence from which to bounce back from Angel’s impending betrayal. Which it looks like to you is probably some sort of Buffy Rorschach test: do you see cruelty, or kindness?

“Willow, tell me you didn’t keep any parts?”

Ted himself feels like a blueprint for the Troika — except that he is, in the end, a robot. But he wasn’t always; he was just a man who turned himself into a robot, which is a special kind of strange, fucked up, and sad that doesn’t get much consideration here. But that’s really for the best, given Ted’s never-seen-thank-fuck actual closet full of skeletons.

(Does Ted’s robot tech lead to the various robot girls? If it doesn’t, it should.)

In a different show, Buffy’s instant loathing of Ted would be over the top; in this show, I just wish they’d built up her relationship with Joyce a little more before throwing a wrench into it. Buffy’s parental issues and fears are just a punchline (can someone explain to me why Xander knows about Freud?), when they could have a lot more resonance. The best we can get from her reaction is a reminder that Buffy has her own kind of spidey-sense, and when she knows something’s wrong, it’s usually, well … wrong.

That wrongness drags out forever and ever, amen, in an episode built to infuriate viewers like me, who love figuring out narrative and the way it works; who want to piece together why things are happening, rather than waiting ever so patiently for the show to reveal its hand. Me watching this episode without remembering the drugged baked goods is me yelling WHY ARE THEY ALL SO STUPID repeatedly at the TV.

(Was I always like this, or did too many fumbled shows make me this way? I forgot that, unlike the Cylons, Whedon once had a Plan. But have I fully forgotten how to occasionally trust a showrunner? And how will I ever narrow down who to blame for that?)

But ok, fair, they’re all stupid because they’re being doped by dopey Ted (John Ritter is such an impressive creeper), except Buffy, who resists Ted and his mini-pizzas. Resistance, surliness, non-participation: these things can come in handy sometimes.

Meanwhile, the Giles and Jenny relationship is slowly, believably, getting back on track. Jenny’s straightforwardness is something I’d forgotten, and her honesty, in a show full of people failing to communicate, is beautiful: “You make me feel bad that I don’t feel better. I don’t want that responsibility.” Which is why it’s absolutely infuriating when she apologizes. Jenny, you were right! Don’t apologize! Don’t even apologize because you’re into Giles! God!

(Of course, she eventually hits him with a crossbow, giving her something to really apologize about, and I will always appreciate that that scene dissolves into giggles instead of guilt.)

I’ve been putting off writing about this episode for weeks and I couldn’t figure out why, and now, suddenly, it’s dawned on me: it’s so full of dudes, and dude feelings, and one of my least favorite pop-cultural narrative cliches runs in the background: all children of divorced parents want their parents to get back together. Sure, some do! But not all, and to make that assumption, without narratively supporting it, is lazy. Buffy’s just saddled with this nice set of daddy issues, entirely chalked up to “child of divorced parents.” The shorthand is frustrating — though, to be fair, there’s a lot of other stuff going on in this story. (But also, Buffy’s dad kinda sucks. #teamjoyce)

Anyway, let’s watch her take out her issues on Ted, who frankly deserves it for everything he does to her: The mini golf slap-threatening scene. The way Joyce doesn’t believe her own daughter, because she’s under the influence of Ted’s creeper drugs. The ugly threat of locking her up for her “best dating years,” because of course that’s all a teenage girl could possibly care about. And then he hits her, because of course he does. He’s an actual monster — but that’s what Buffy needs. Something she can fight.

Until she can’t, because he seems like a person, and maybe he dies like a person, and the horrible cops get involved (he hit you, did he, huh, where’s the bruise) and come to school and maybe Buffy really screwed up this time and the problem with all of this, sad music playing over the whole thing, is it assumes a lot of naivete on the part of the viewer. Did we ever believe this was actually Buffy killing a human? Even back in 1998? Would our heroine kill a human in the second season? No. Flipping. Way.

But she would kill an evil lady-murdering robot. (How much trauma results from whatever Xander sees in that closet, and how perfect is it that Cordelia notices the mismatched rug?) The cast-iron pan is a nice callback (it’s how he gets those mini pizzas so great, he says), and the horror movie music is as perfect as the sad-feels music is unconvincing, earlier.

Nothing’s as good as Buffy walking in on Giles and Jenny smooching at the end, though. Adults gonna keep on adulting together, no matter your teenage trauma.

Boy am I glad that one’s over.

HEY, THAT GUY! FACTOR The guy who plays the police detective is one of those “one episode of every show ever” dudes… though he’s going to turn up two more times on Buffy! I never realized they had that kind of cop continuity. Coptinuity.
DOES BUFFY GET INJURED? Well, Ted hits her.
WORST FASHION CRIME AGAINST HUMANITY One of my notes from this episode just says “what are her pants”
IMPORTANT THING THAT NEVER COMES UP AGAIN But did Willow keep the parts?
IN HOW MANY WAYS DOES XANDER NOT DESERVE WILLOW’S AFFECTION Gonna have to retire this category soon given how much time we’re spending on the love-hate Xander-Cordy makeouts, but there’s still that one heartbreaking scene coming, so … keeping it for now.