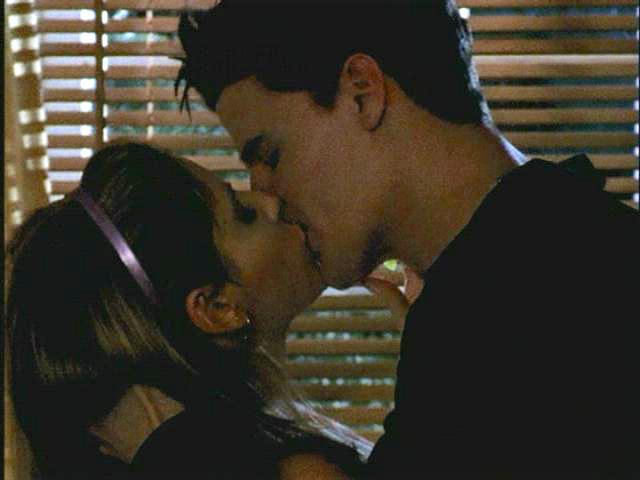 April 21st was a bye week for Buffy, which was handy, as it gave me some extra time to think about “Angel” (and also I was busy making Buffy references in my Magicians season finale review. Do you watch this show? You should. Anyway). The truth of the matter is that I want to blow past “Angel” to get to “I, Robot… You. Jane,” because I have a lot of thoughts about the internet in the ‘90s.

And also because Angel is kind of boring, this time around. I’ve been there for Buffy and Angel, though I never came down firmly on one side of the Angel vs. Spike wars. I’ve sobbed my way through “I Will Remember You”—the Angel episode, not the Sarah McLachlan song—more times than I’m likely to admit. But Angel the person is not as interesting as Angel the symbol, and the purpose he serves in this show.

He complicates the morality. Vampires, as far as Buffy—and Giles, and the whole goddamn Watchers Council—know, are simple. They’re bad. You kill them. Stake, heart, dust. They might’ve been good people once, but they’re demons now, and they just want to kill you anyway, so poof it is. They are bad guys, and bad guys are just bad.

Angel, when it comes right down to it, introduces the complexity that eventually leads the show to season six and the trio and the horrible problem of monsters who are also just people. We’re a long way from that, at this point. But he’s a bug in the system, in the Slayer mythology that says what she does is right and what they do is wrong. He’s helped her and cared about her and sure, been mysterious and annoying, but generally, it’s seemed clear that he’s a good guy.

Just a good guy with fangs.

END_OF_DOCUMENT_TOKEN_TO_BE_REPLACED

Welcome Back to the Hellmouth: “Angel”