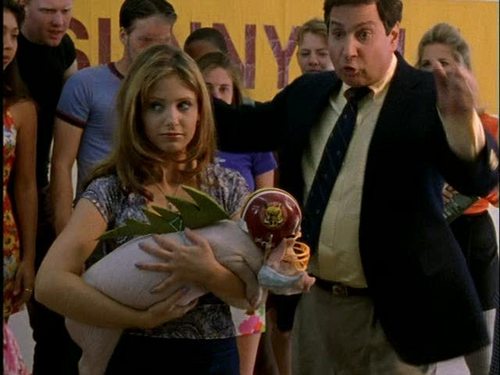 Anthony Stewart Head has never gotten the credit he deserves for these early Buffy episodes. In an excellent AV Club interview, James Marsters praised him for being able to be the infodump guy and make it interesting, and I’ve been thinking about that ever since. I can’t imagine anyone else creating Giles the way he did, from his dry enthusiasm when he first meets Buffy to the moment with Ben in “The Gift” to the moment he walks away from the Scoobies in the empty hallway in “Chosen.” Head built layers on this character with the slightest inflection, as when he has to tell Buffy what happened to Principal Flutie:

It doesn’t look like much, does it? Three words and an “uh.” But it’s Giles. It says so much.

And in its own very first-season way, “The Pack” is so Buffy. The show didn’t really excel until it stepped out of the “make a high school thing monstrous” zone, but these early episodes do serve as a kind of worldbuilding baseline. You never know what you’re dealing with in Sunnydale. It might just be Cordelia—or it might be a gang of apparent 30-year-olds in the most astonishing ‘90s fashion, possessed by hyena spirits and ready for lunch.

“I can’t believe you of all people are trying to Scully me.”

END_OF_DOCUMENT_TOKEN_TO_BE_REPLACED

Welcome Back to the Hellmouth: “The Pack”