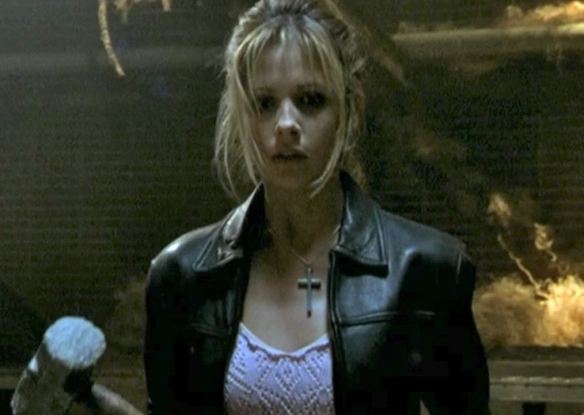 PREVIOUSLY, ON BUFFY THE VAMPIRE SLAYER… all of season one happened, Buffy died, the Master died, Buffy didn’t stay dead, Angel and Giles made some dubious choices about trying to protect Buffy, and it’s all better now, because did we mention dead Master?

PRESENTLY, ON BUFFY THE VAMPIRE SLAYER … If life were “normal” in Sunnydale, is this what Willow and Xander would do? Walk around quoting movies and not quite flirting? (This season’s first appearance of me yelling WILLOW NO came impressively fast.) Buffy’s been AWOL all summer, apart from a few postcards. It was the most boring summer ever, according to Xander.

It the real world, it wasn’t, not really. The summer of 1997 was the summer Princess Diana died, and even when we didn’t want to, we saw her on TV: footage from the accident, footage of those kids, footage of her funeral. Robyn had a hit that summer—a far cry from her hits of today. The Spice Girls were definitely a thing. So was Meredith Brooks’s “Bitch,” which somehow people still quote. The Fifth Element came out at the start of summer ‘97, just as Buffy’s first season was ending. Movies were often very bad (Con Air, Batman & Robin) but we also got Contact, which still has some things going for it. In the UK, readers had just met a young fellow called Harry Potter.

Looking back on pop culture often feels weird because so many things are built to make you remember the big stuff. It’s as if life was one big Remember This Wacky Thing from Before We Existed! post on Buzzfeed. The little stuff was there, too. I listened to That Dog’s Retreat from the Sun incessantly. My mix tapes were full of Jawbreaker, Helium, Velocity Girl. I had already met people from The Internet for the first time—the first few times.

In August of 1997 I moved into an apartment on St. Mark’s Place where I would live for the next five years with a rotating cast of roommates and questionable futon situations. I had not yet officially graduated from college because I had been in no state to finish my required colloquium at the end of senior year. I spent the summer reading books about fairytales, identity, the stories we tell ourselves about who we are, and I passed, somehow. My memory of that is so faint, like it barely happened. What did I say to those advisors? How did I wrap anything up after the year I’d had?

I didn’t graduate on time because my stepfather had died, suddenly, in November of 1996. I was ten days shy of 21. The story of that year—of years after that—is the story of me, shocked, not knowing how to grieve, or even how to be. I made mistakes. I did very stupid things. I was cruel because I didn’t know how to be anything, needy because I didn’t know how to fill that space.

You can see, maybe, why “When She Was Bad” cemented Buffy as something that was mine.

“When She Was Bad” is full of glorious moments. It’s the second “Written and Directed by Joss Whedon” episode, and it wasn’t long before we knew—the gaggle of people who slowly gathered to watch Buffy every week, Buffy Night 1.0—that those words meant we were getting the best Buffy was going to be. That’s still true, I think, though we’ll see if I’m proven wrong.

But we didn’t know it yet. What we knew is that Buffy had shrunk, somehow, lost her so-called baby-fat, her face slimmer, cheekbones sharp under that very ‘90s hair. That Cordelia was going to become part of the gang; that Jenny Calendar was not cool (Burning Man! In 1997!) except maybe she was, kind of, maybe she was ok after all. We didn’t mind Xander, back then. We were fools.

I like to imagine that we already disliked Buffy’s stiff, stilted dad, though, who’s just there to reinforce the fact that Buffy has been distant all summer. Everyone else is fine: they survived! Willow and Xander bet on how long it would take for Giles to say he’d consult his books! Cordelia is Cordelia! And Giles, when he sees Buffy, is so Giles: the look on his face, grateful, joyful, happy. He needs to work, and the Slayer is his job. But she’s more than that, already.

And she’s in no way ok. This episode builds Buffy’s trauma so very, very carefully, from her horrible dream in which Giles kills her while turning into the Master to the way she isn’t cruel right from the get-go, but only as she begins to understand that everyone else has moved on, that they’re not still wounded and frightened and genuinely not in any way “over it.” When Angel turns up, with his typical brand of useful-but-not, and he’s just the same old guy, the guy he’s been for hundreds of years—she can’t stand it. “You woke me up from a really good dream.”

“I missed you,” he says to the window, but by the time she says it back, he’s gone. She wants to care, to connect, but no one is looking at her, really, and so she makes them.

And that’s when the episode snaps into place. Cordelia tries to mock the gang; Buffy is Mean Girl Cordelia, but meaner. (I do love that of course Cordelia didn’t tell anyone about vampires because she’d have to admit who she was fighting them with.) Angel tries to drift into her way, like he always does; she throws his vampire-self back in his face and turns to Xander, whose affections she knows she can use. It’s rotten to Xander; it’s even worse to Willow, who is the person Buffy has the least reason to hurt. But she’s not thinking about Willow, and I really don’t blame her.

Leave it to Cordelia to call her on it. Cordelia may be a bitch sometimes, but it’s always with a reason, and she doesn’t get Buffy’s reasons.

“Embrace the pain, spank your inner moppet, whatever. But get over it. Because pretty soon you’re not even going to have the loser friends you have now.”

(I generally hate “get over it” as a turn of phrase but Cordy knowing when a person’s bitchiness is out of character is such a good, perfect, accurate things for her character.)

Having given us Hurtful Buffy, the episode shifts to Hurting Buffy—the one who finds the Master’s grave empty, since the Annoying One’s new minions have dug him up. It scares her; it’s more than she knows how to deal with. And Giles, eventually, understands. It’s almost as if none of them thought about it before: dying is traumatizing, and hard to deal with, and if love makes you do the wacky, what does dying do?

In Buffy’s case, it makes you scared, and angry, and resentful, and with no clear place to direct all that pain. These are still her new friends. She can’t talk to her mother about slaying. Angel keeps lurking around, only semi-helpful, like a weird guy who chats you dark poetry on AOL instant messenger, but also is good at math homework. (The foreshadowing of Buffy taunting him, “You think you can take me?” Well played, Whedon.)

Angel, for all his faults, is sometimes right. She does need someone to watch her back, and someone to trust, and these will keep being issues for Buffy, forever. She wants to look out for her friends, she has to look out for her friends, but they are her strength and her liability—and they have an alarming tendency toward getting kidnapped, as happens here. She’s pissed and hurting, but she does care, and she hardly needs surly Xander (“If they hurt Willow, I’ll kill you”) to underscore that. The Annoying One’s minions have kidnapped Giles, Willow, Cordy, and Jenny, because in order to raise the Master, they need the people who were literally closest to him when he died.

Which leaves Surly Xander and Mopey Angel on Team Buffy. It’s a good thing she hardly needs them.

“What are you going to do?”
“I’m gonna kill them all …. That ought to distract them.”

And that’s what she does, with the help of a lot of rage and a convenient sledgehammer. What I love about this, among so many other things, is that everyone, watching, understands. They didn’t entirely understand before, despite Giles’s insight, or Angel’s patience. But watching her fight, everything is clear, and all the clearer when there are no vampires left to kill.

Just the Master’s bones to crush.

It is so rare to find something as cathartic as that. I love that Buffy had it; I love that Angel forgives her, immediately. He’s the closest, and he just holds her, which is all she needs and probably all she can handle. A moment of safety. A good choice. It’s not over. It will never be “over.” But that immediate terror, that thing she fears—it’s gone. She used her own power to beat it.

That doesn’t mean everything is better, but it means Buffy can look past her fear and trauma and be a little more self-aware: “I put my best friends in mortal danger on the second day of school!” Those friends, when they show up the next day—they don’t make a thing about it. This borders on avoiding, but on the other hand, there’s a gentle perfection in the way they reconcile through ordinary conversation. They all allow normality to come back in, to let it be, and to let being be enough. The little things still matter. They all still matter to each other.

(The show, on the other hand, sets all of this to the actual worst closing music. Arguably some of the worst music in Buffy history. It sounds like they got it on a CDR in a box of bad cereal and it goes on forever.)

I’m not sure the show always remembers to respect this part of Buffy’s backstory—this trauma, the time she died and didn’t choose it. Later, the death she does choose is something else, and it shifts the whole way she exists in the world. And sure, you can say she got over it, inasmuch as anyone gets over anything that heavy. But the important part is that the show lets her get through it—with bumps and bruises and bad choices and mistakes.

HEY, THAT GUY! FACTOR Buffy’s dad was Almanzo Wilder on Little House on the Prairie, which I never saw much of BUT as a child reader of the books, this is kind of mindblowing. Also, the random vampire who helps the boss vampire, Absalom (played by Brent Jennings, who may also look familiar from being in one or two episodes of everything ever), has spent the years since being on basically every soap opera.
DOES BUFFY GET INJURED? I sort of forgot to track this, didn’t I.
APPEARING BAND Cibo Matto!
WORST FASHION CRIME AGAINST HUMANITY Oh god, Willow’s twinset, maybe? But why are Buffy’s shirts all so big in the armpits?
IN HOW MANY WAYS DOES XANDER NOT DESERVE WILLOW’S AFFECTION In all the ways that involve him flirting with her only to immediately stop paying attention the minute Buffy appears.